DR MICHAEL MOORE, Rotarian, and Friend, in answering the question – What was he doing now? – said it didn’t take long for work to disappear & for access to certain aspects of My Rotary to be denied.  Michael’s most recent joy being his 1966 Austin Healey Sprite, which he proudly drove to DG Leo’s to deliver carry-over Rotary material.

Michael has been involved in the Global Task Force on Immunisation, which he has been asked to chair, currently working on policy & webinar on polio. Sri Lankan representative negotiated with Tamal for 2 days inoculation of children which resulted in a ceasefire for two days and was considered the beginning of the peace process. Taliban also allowing polio vaccinations.

MARY-ANN, in a most unassuming way, shared with us different ideas of fundraising which her own Rotary Club undertakes, showed us a map of the area where she lives and works; and introduced us to the game of 5 pin bowling. Mary-Ann’s career starting as a secretary, worked on the railroads, and in a photocopying office. She was sought out to be a trainer and then later owned 4 UPS (mailbox) businesses.

Mary-Ann joined the Rotary Club of Collingwood South, Georgian Bay, Ontario CA in 2015 and was the recipient of a Paul Harris Fellowship award in 2017. Mary-Ann’s Rotary club focusses very much on youth programs supporting a Youth Centre and hosting exchange students generally from Scandinavian countries. The Club sponsors a hockey team, a community garden, and a youth radiothon. Their big fundraiser was the Taste of Town which gave local vendors the opportunity to display their wares & produce while raising funds for their Rotary projects. They sponsor a Santa breakfast for the children and grandparents. They support World Polio Day, Back to School projects in the Philippines and bought a container which was shipped to Tanzania and transformed into a library. Mary-Ann’s RC Club draws from a population of 22,000 where there are two Rotary Clubs. The average age is 55-60.

Governor of Rotary District 9700, John Glassford of the Coolamon Club, made his official visit to the Temora Club meeting on Monday night.

Mr Glassford gave an informative address to the members on his vision for the Rotary District during his term of office. 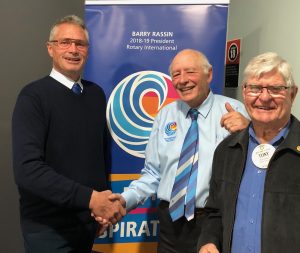 This week’s guest speaker was our President, Rob Oliver who has recently returned from a trip with his wife Helen to Alaska and Canada. Tonight, he wanted to tell us a little about just one part of his trip which was a visit to the Hutterite community in Canada. 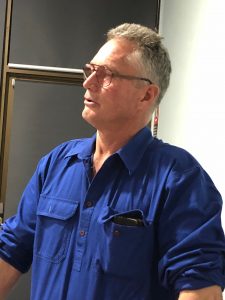 The Hutterite’s originally came from Austria to Russia last century but were persecuted for their religious beliefs so emigrated to the USA and ultimately settled in Canada. They speak lower German, follow strict religious beliefs and dress codes.

Upon arriving at their farm, Rob couldn’t believe how much new farm machinery they had – the machinery yard covered 7 acres and was full of new John Deere equipment including headers, spray rigs, tractors – everything you could imagine.

There are no more than 125 people in the community – as the population grows, members break away and settle a new community. They share communal kitchens and dining rooms, but each family has their own home even through no house has a kitchen. All homes look the same and it is a cashless society.

Rob was struck with the fact that they are really just like us – but their life does adhere to some strict guidelines. For example, the role of women is cooking, housework and gardening while men make furniture and work the land. When girls turn 15 they receive a cupboard and when they marry they rec

eive a bed. When women marry, they leave their family and community to join their new husband’s community.

The Hutterites do all their own mechanical work, grow food in gardens, operate a dairy, raise chickens and sell fruit and vegetables at the markets. They accept technology such as telephones and the internet and were very interested to hear about farming practices in Australia. They grow wheat, canola and peas and pay tax.

This week’s guest speaker was new member Lyn Jefferis. As a new member of our club and also new to town we were all keen to learn a little bit more about Lyn and she had some interesting stories to tell.

Lyn was born in Wollongong, living there until recently relocating to Temora. She has been married to Jack (also a new member) for 44 years and they have two son 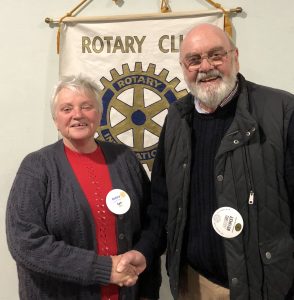 s – Paul (40) and Glen (38). Lyn lamented that over her lifetime she has seen big changes in Wollongong as it has morphed from a beautiful safe town into an extended suburb of Sydney with the associated crime. She remembers the beginning of this change being the Wanda Beach murders in the 60’s.

Lyn’s first job was as a Christmas casual at David Jones and they placed her in the china and glassware department. Her family thought it hilarious as she considered herself to be very clumsy and they used to visit her to see what she had broken that day. When she finished school, Lyn completed Business Studies and began employment with Armaguard where one of her duties was to look after the pay packets for BHP – real cash in envelopes. We were entertained with stories of cash falling off backs of trucks – quite literally!

After a personal experience with a struggling neighbour and her children, Lyn was inspired to go back to school and study Social Work and Welfare. She wanted to help children and do what she could to improve the situation for many who had no voice – but the reality of the working environment soon took its toll, and eventually Lyn had to walk away from this work. Lyn lamented that she can only imagine that for social workers the situation must be so much more difficult now that the drug ICE is having an impact on families.

Lyn worked at the 2000 Sydney Olympics as a Security Guard at Olympic Park and says it was the most rewarding and interesting experience of her life. She volunteered for every position possible and worked around all parts of the venue. She got to meet celebrities and sports people and imparted a few impressions of those encounters.

We are glad to have you with us Lyn.

A beautiful day to attend a garden opening! Brendon and Marg Fritsch proudly represented Rotary Club of Temora at the opening of the Temora Hospital Gardens upgrade yesterday. Looking forward to seeing it bloom over the coming months! ... See MoreSee Less

Congrats Helen & Neil Taylor, winner of our Spring Garden RaffleTicket 34230Drawn by Peter George.Thanks to all of our supporters ... See MoreSee Less

The Four-Way Test is a mirror, not a window Rotary members should not use The Four-Way Test to look at others but rather to look at themselves in considering the ramifications of a thought, statement, or action. It should not be a window through which we look to judge others. It is a mirror at which we look to judge ourselves. 🪞🪟I gave much thought to what each of the Four-Way Test questions asked of us and came up with a step by step process to give some real clarity behind these most often recited questions.#fourwaytest #rotaryinternational ... See MoreSee Less

Wow! What a great social night last night!! Rotary Club of Temora met with Rotary Club of Campbelltown at Temora Aviation Museum. It was a fantastic night 👌 Our speaker Wing Commander Paul Simmons was inspiring. A great night! Special thanks to Murray Kear for organising the night ... See MoreSee Less

When this happens, it's usually because the owner only shared it with a small group of people or changed who can see it, or it's been deleted.
View on Facebook
· Share

Not long to go now to get a ticket in our fantastic raffle (a registered trailer and contents)- drawn Saturday 20th November. If you haven’t got a ticket yet be quick! ... See MoreSee Less

Last night we welcomed Georgian Vasilescu, the manager of the Australian Rain Forest Honey factory to speak at our meeting. Georgian was asked to come to Australia to manage our honey factory and associated environs. A very interesting insight into the industry. ... See MoreSee Less

So good to have DGE Geraldine Rurenga & Sandra Harper volunteering at the bookshop ... See MoreSee Less

Always lots of opportunities to mix and have a laugh at our dinner meetings. Great to touch base at least once a week! ... See MoreSee Less

A great evening at Rotary Club of Temora last night. We were very pleased to have our District Governor, Leo Farrelly, with us; and also our Area Governor Elaine Almond. We also inducted our two newest members to Rotary- David Morris and Pastor Patricia Morris. Welcome to Rotary! ... See MoreSee Less

Welcome! You are invited to join a meeting: A New Rotary Perspective in Orange (Mary Brell). After registering, you will receive a confirmation email about joining the meeting.

Our speaker last night was our very own Pam Murray. Each new member gives a ‘Behind the Badge’ talk that gives members a greater insight into the life and interests of our new members. Well done Pam 👍👌 ... See MoreSee Less

Timeline PhotosToday is World Polio Day.🗽 In 1916, a Polio outbreak hit New York City. Several thousand people were infected and more than 2,000 died. Cleaning, quarantine and closing public places like swimming pools and playgrounds were all techniques used to control the spread. Iron Lungs just like this one were used to help polio patients breathe but in the end, it was the polio vaccine that saved the day 🩹On World Polio Day, let’s celebrate the success of modern medicine and the lives that vaccines have saved. Everyone 12 and over is eligible for a COVID-19 vaccine. Get yours 👉 www.nsw.gov.au/covid-19/health-and-wellbeing/covid-19-vaccination-nsw ... See MoreSee Less