The Rotary Caravan has received a facelift. We have all seen the caravan in the main street being used as the venue for street stalls and cake stalls for the towns schools and community groups. While the caravan belongs to the Temora Rotary Club, it is registered, housed and insured by the Temora Shire Council. A few months ago, members began discussions regarding the condition of the caravan and it was decided that a good clean up, inside and out, was required as well as some new signage to ensure that the town knew the caravan belonged to the Rotary Club.

Now that all of the work is complete we must thank those people who worked hard to complete this project in record time. Ross Atkinson for the initial design and organisation. Malcolm Retallack and Rob Hartwig who were the driving force and provided most of the manual labour. These two hard workers steam cleaned the outside, twice, cleaned the inside, repaired the step, lights, wind down legs and took the van to the sign writers. Di Hartwig for painting the ceiling and providing sustenance to the hard working labourers. Finally, to our local contractors Irvine Signs who designed and installed the Rotary signage within our fast timeframes and Chris Schmidt who renovated the internal shelving to make it more practical for use.

We think the caravan looks fantastic and there is no doubt that when it is in the main street each Friday, everyone will know it belongs to Rotary. 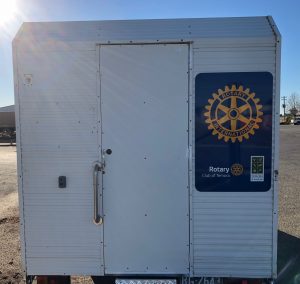 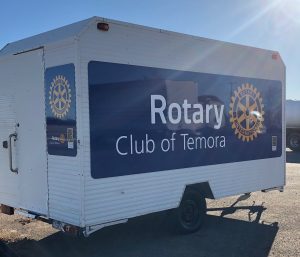 A Rotary Foundation fundraiser night held at the Patchwork Inn.

Partners and guests enjoyed fellowship and conversation in a casual setting before enjoying the many wonderful casseroles, hot dishes and desserts moving inside and being seated.

We were lucky to have a walk up guest in the way of Doug Mullett from the Werribee Lions Club who regaled us with stories of his motorcycle trip or more precisely his time OFF (2x) the bike on his back waiting for the Royal Flying Doctors to rescue him.

Thanks Doug it was enlightening and great that we got you before the Temora Lions. 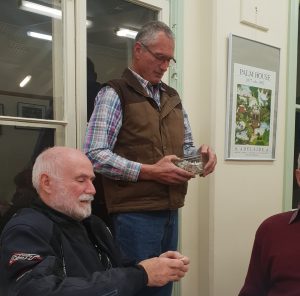 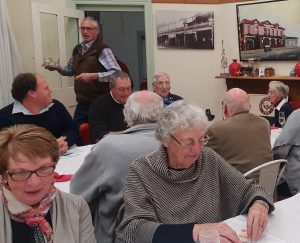 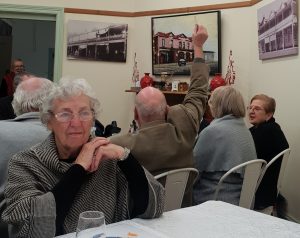 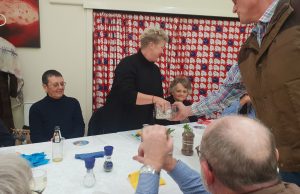 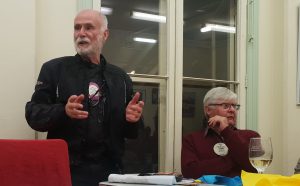 An Order of Australia was presented to Mr Neville John Thompson for Services to Agriculture and to the community of Temora.

The following is his biography:

Born 1930 in Tullamore, educated at Tullamore Primary School, Yanco High School and moved to the Temora region in 1946.

2005                   Awarded a Rotary “Paul Harris Fellowship” in recognition of dedicated service and commitment to the organisation and community over a long period of time.

Neville was accommodated with assistance by the Whiddon Group through the thoughtful help of local manager Gail Lynch.

Board Meeting as well but 16 of our 22 attended.

Guests and hopeful member prospects Lyn and Jack Jefferies along with Fr Bill Pryce from Cootamundra.

Ross Atkinson got the scratchy and Mel Gallagher secured the Red and promptly straight swapped it with Ross, Lyn got the White.

Still no activity on out Clean Up of Old Coota Road but the Spring Garden Raffle prize is already starting to take shape and it isn’t even Winter yet!

We have one student from Temora High going to the IT Expo but still have two more spots.

Very interesting Speaker I’m told and will be invited back when the farmers aren’t out all hours on their tractors. 8 of our 22 attended

I was away in South Australia on holiday.

Helen Maxwell got the scratchy while Keith secured the Red and Brendon Fritsch the White.

A quick addition to the programs will be the annual Posie for Mum prior to Mothers Day. 12th May at the Hartwigs.